Indian Society of Pediatric Gastroenterology, Hepatology and Nutrition (ISPGHAN) was created in the year 2013. The society was registered on August 22, 2013 at Chennai, Tamil Nadu under Certificate of Registration of Societies: Serial no. 361 of 2013. Culmination of this specialty has been hard work of our senior members of Pediatric Gastroenterology Sub-speciality who possessed skills of togetherness and vision of growth. In this journey of creation, they stood supported by our young and talented specialists. This creation was a historical event in the phase of development of the super-specialty. The first executive committee of the society was declared elected on September 28, 2013 at Pune.

With the advent of time the society marched forwards with new mile stones of creating ISPGAN logo on 31 July, 2014, new digital record format of ISPGHAN member registration, start of a new course of “ISPGHAN fellowship” of one year duration, formulation of practice guideline on “functional constipation- now published in Indian Pediatrics October, 2018”, paved a way for strong advocacy- documentation of need for import of therapeutic food formulations to Government of India which were latter approved (F.No. Stds./ Nutra-IEM/ FSSAI-2016 [Pt. F1] dated 02 November, 2016). The Society started Annual Award entitled “Mehta, Mittal, Sankaranarayanan Oration” in the year 2015. This award is in the name of the members who were the founders of the specialty (National Pediatric Gastroenterology Forum, 1988). Subsequently the Society in the year 2015 gave approval for annual award named “Chandra Prakash Mittal Award” for best research.

The first annual conference of ISPGHAN was organized by Dr. Geetha Sanil at Kochi in September, 2014 and the second was organized by Dr. Neelam Mohan in collaboration with biennial 14th International scientific meeting of Commonwealth Association of Pediatric Gastroenterology an Nutrition (CAPGAN) in October 2015 at New Delhi. Society grew in strength by increase in society registration numbers, training programs, with blending activities of advanced nutrition courses along with manuals formulated by Dr Naresh P. Shanmugam, “Celiac Support Organization” led by Dr. Sushma Narayan and Dr. SK Mittal, mid-term meetings, modules of Pediatric Gastroenterology supported by Indian Academy of Pediatrics, augmentation by different allied big societies ( Indian National Association for the Study of Liver Diseases; Indian Society of Gastroenterology). Steps were taken towards multi-centre research to create a data base as collective publications.

It is heartening to observe interest and performance of our young colleagues in the areas of patient care, application of technology and intent of excellence. At national and International levels Pediatric Gastroenterology, Hepatology and Nutrition specialty in India has made inroads and has stood up to emit the light. Scientific abstract submissions are increasing with passage of time. While developing the specialty a lot of emphasis has to be given to development of allied specialty particularly pediatric surgical gastroenterology, radiological interventions, pathology and molecular techniques. This is not going to come easily unless we motivate and create interest among such specialists. Individual and collective efforts are required. In the endeavour of subspecialty development seniors paved a strong foundation of the society and the young ones are taking responsibility to build the society further. Let the light of knowledge prevail. 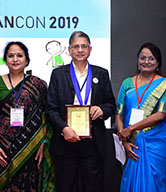 This is only for members, login to access to this link.Login

Any difficulty in login please contacthelpdesk@ispghan.org